The other day an app on my phone sent me a “5 years ago” grouping of pictures-usually it just reminds me that I take way too many random pictures of food, or my dog in such a short time span. But this time, these pictures sparked memories of when my husband, daughter and I visited Hiroshima for the very first time. It was July 15, 2015-6 months (to the day) after my mom passed away. As you may know, we honored her at the Hiroshima National Peace Memorial Hall for Atomic Bomb Victims.

We stayed at a ryokan (a traditional Japanese inn with traditional meals serving local and seasonal items) on Miyajima Island (10-minute ferry ride from port of Hiroshima). Interesting fact-the actual name is Itsukushima Island after the famous Itsukushima Shinto shrine (a UNESCO World Heritage Site) built over water there-but has been called Miyajima-Japanese for shrine island, for quite some time

We spent July 16th, at the Hiroshima Peace Memorial Park and Museum. We stood in front of the iconic A-dome building in shock and awe, we bowed our heads in prayer at the cenotaph (built in 1952-the year that all Allied Occupation Forces left Japan) that protected the cement vault holding 108 leather bound books inscribed (by hand) with names of over 297,000 people(2015 numbers) who had since died but were in Hiroshima on August 6th . My mother‘s name was added in time for President Barack Obama’s historical visit in May 2016. 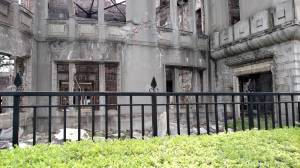 We stopped at the school children monument to pay our respects to my mother’s classmates that died that day. At the Hiroshima Memorial Hall, I lovingly and proudly added her story to the database and her picture  on the Memorial Wall, near her Papa.

Inside the Peace Museum we listened to a survivor story, but instead of being told by an actual survivor or family member it was by a trained volunteer. Since the survivors are dwindling, and some family members may move away, the museum recognizes the importance of keeping these stories alive. TLCB wouldn’t come out until a year later, but after listening to that compassionate volunteer’s respectful manner telling that survivor’s emotional story-even though had no relation to them at all -sparked the decision that I would do my best at making sure these stories-of my mom’s , my families’ suffering and loss that day were also never forgotten. I think I cried from the moment we arrived until after we left. I’m tearing up as I write this now….

Okay, got my tissues-we can move on…

We not only took in the splendor of my mother’s hometown with the Seto Inland Sea, Mount Isen, and palm trees. But, as we walked the sandy path to the Itsukushima Shrine(famous also for the giant red Torii gate that seems to float in high tide) where my mother went for various festivals, we saw Hiroshima through her eyes. I finally understood why she always said she grew up in the most beautiful of places. Fun fact – Nara may be known in Japan for having over 1,000 sacred deer, but Miyajima Island also is home to many photo friendly deer. You might even see deer eating “street food” or wearing a pine cone on its back! 🙂

Of course, as with any trip we had some drama-just a little typhoon headed for Hiroshima. We caught the last ferry back to Miyajima Island where a lovely ryokan employee waited for us at the ferry station, knowing we were due back that afternoon.  They didn’t know when, but wanted to be sure someone was there when we did return-so they waited all day-so very kind and thoughtful (heck, we can’t even get everyone to wear masks,here). I’d also like to mention that while in Hiroshima Peace Park and back on Miyajima Island,everyone was so calm about the typhoon-even as the wind picked up. It would be like having a summer thunderstorm here in NC-expected and usually no big deal(except to Scarlet, our kitchen ninja dog, whose only nemesis is booming thunder). I fully empathized with her and lost my feeling of calm, knowing the typhoon was headed our way. And oh yeah, we were staying on an island-you know- by definition- surrounded by water.

It was unnerving to hear the wind and the rain that night. I don’t think any of us got much sleep. However, the next morning we woke up to gorgeous weather. The worst of the typhoon veered around us-coincidence, I say not…. Especially if you knew my mom! She would never let something happen to us after we honored her and her Papa. 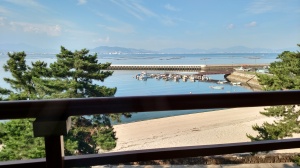 This trip down memory lane leads me to the fact that this year is the 75th Anniversary of the atomic bombing of Hiroshima (8/6) and Nagasaki(8/9). I am beyond grateful for the upcoming opportunities to honor my mom, family, and other atomic bomb victims. I hope that I’m instrumental in giving a voice to what they endured. And that the type of horrific deadly destruction that lived in their hearts, dreams, and memories for their entire lives never happens to families ever again.

I truly wish that my body holds out so I may use the skills, and compassion the Lord gave me to continue sharing the message that we must remember our connection to one another as human beings. Hopefully my words can open readers,(future voters’) hearts as well as their minds to what happened at 8:15am that August day 75 years ago. Deadly mistakes that we are at risk of repeating if we don’t connect with the fact that the people under those now famous mushroom clouds were someone’s child-like my Mom or someone’s parent-like her Papa-my Great Grandfather.

My mom & family in their back yard

Below is the list of events along with description of the sponsoring groups. Please check out these sites and catch their commemoration if you can, not just to see me (which I would love to ‘see’ you), 🙂 but to hear other survivors stories, and from coalitions, that are working toward peace and elimination of nuclear weapons:

(Sara and I will be holding the banner ribbon that Sara made.)

I met June Tano by email and a few months later we met in person at the UN Bookshop signing and she gave me two beautiful ribbon banners. The Ribbon was founded by Justine Merritt who had visited Hiroshima Peace Memorial Museum in 1982. She was greatly affected by the tragedy caused by the Atomic Bomb. After arriving home, it came to her to create a Ribbon, and decided to have a Ribbon event on the 40th memorial anniversary of Hiroshima and Nagasaki.

ASIAN AMERICA: THE KEN FONG PODCAST is a weekly show that explores the cultural, artistic, historical, and spiritual aspects of the Asian American community. Each podcast, host Ken Fong shares stories and thoughts from his own life, and then interviews guests across all sectors of society who are transforming what it means to be Asian American.

(I will be one of the people saying a few words.)

I was introduced to Fumi Stuart, Executive Director, USA World Headquarters, whom I instantly felt a feeling of friendship. The Organization’s first seeds were planted in Ishikawa, Japan where a small gathering of peace workers joined Masahisa Goi to listen to his philosophy and visions for a better world. Masahisa Goi came to be respected as a great master in his field throughout Japan and his ideals for peace on earth gained much support.

I had an interview on the podcast, Nukes of Hazzard(Center for Arms Control and Nonproliferation Washington, DC) last year on 8/6.  They are one of the 150 coalitions that are organizing this National Virtual Event. and who invited me to submit a proposal for this event.

“Two award-winning Japanese American authors Kathleen Burkinshaw and Naomi Hirahara,(Hiroshima Boy) join together for the first time to discuss how they felt compelled to tell the stories of their Hiroshima hibakusha (atomic bomb survivors) parents through novels.”

Mom, I love you and you will always be the bravest person I will ever know ❤

Will also be sharing on Welcome Heart

so what? not everything has to make sense!