If you’ve wondered about the connection between my mother and Oak Ridge, TN mentioned in Part 1 ( and I hope you did 🙂 ) here is Part 2…

I’m embarrassed to admit, I didn’t know that the U.S. Government (USG) founded Oak Ridge as a Manhattan Project site to enrich uranium for the atomic bomb dropped on Hiroshima on August 6, 1945. I knew about the Manhattan Project of course, but always associated it with New York City, Washington(state), and New Mexico. Yup, Oak Ridge lived up to its Secret City code name! 😊 In case I’m not alone, here’s a brief summary of the Secret City:

The USG wanted inexpensive land tucked away in a relatively unpopulated, unknown area to build their 2 million square foot facility (known as K-25). The small Wheat Community (pop. 1,000) fit the bill with its 60,000 acres of farmland nestled in a valley surrounded by mountains. USG hired employees, built dormitories for the workers, and eventually brought in prefab homes for them. Many of the initial workers were women (most men away fighting in WWII) who operated calutrons (device enriching uranium by separating isotopes). It wasn’t called Secret City just for the location. People who worked and lived in this gated community were explicitly told not to discuss their occupation and they only knew information pertaining to their specific job. No one (except some of the scientists) knew the final product/purpose of the facility. Sadly, many of the workers also died as a result of radiation they were exposed to at K-25*.

Okay, so once I knew all that, I can honestly admit that I initially had a pit in my stomach. Would they accept me or my mother’s story? How would I feel being there? But the more I thought about it, my message has always been not only to show why nuclear weapons should never be used again, but to also tell the human side of the story. I do not discuss TLCB and my mother’s experience for the sake of blaming anyone. My mother said that “war is hellish for both sides”.  My hope is that readers/students will see the connection we have with other human beings, that leaders and the fanatics of other countries do not define all the citizens of that country. In addition to writing about my mother surviving the atomic bombing, I wanted to make an emotional connection while correcting some misinformation about Japanese citizens during WWII. That’s why I wrote about the culture, family life, and mindset during WWII through my mother’s 12-year-old eyes.

I have great respect for the people who did their patriotic duty by working at K-25 and Hanford. Telling my mother’s story about her family (and mine) in Hiroshima, does not in any way vilify the K-25 or Hanford workers nor does it diminish the important work they did for the U.S. war effort. Both stories can co-exist without dishonoring the other and each deserves to be heard.

The kindness and compassion from the Oak Ridge/Knoxville students, teachers, and the librarians I met touched my heart. Find out how a song of peace connects Oak Ridge, TN to Japan in my 3rd and final blog post of this series tomorrow….

*Again, this is only a very brief summary. Please visit http://k-25virtualmuseum.org/index.html for more details about the Secret City.

Also sharing this post at Welcome Heart, Let’s Have Coffee

I had been wanting to write about my visit in May with the amazing students, school librarians, and teachers in the Oak Ridge, TN schools for a couple months now. But my father passed away and my pain flare ups prevented me from writing this until now. Because I didn’t want to have one really long post, I’ve divided it into three parts, with the 2nd posting tomorrow, and the last posting on Thursday ( I know, 3 in a row-you will probably never see me do that again 🙂 ). While writing about my Oak Ridge school visits, I read an article about a Japanese exchange student in the state of Washington, that I wanted to use as my introduction…

Back in May, a Japanese exchange student, Nonoka Koga, made headlines in US and Japanese newspapers. Ms. Koga spent the school year at Richland High School in Richland, Washington. She made news’ headlines because she spoke out about the school’s logo (the capital letter R over a mushroom cloud) and popular chant (“Proud of the Cloud”). Richland is near the town of Hanford – one of the locations for the Manhattan project and where they enriched the plutonium used in the atomic bomb, Fat Man, dropped on Nagasaki on August 9, 1945.

Nonoka Koga is from Fukuoka, Japan. But her grandparents lived about 30 miles from the town of Kokura which was the intended target for the atomic bomb that day. However, since it was a cloudy day in Kokura, her grandparents were spared and Nagasaki with clearer skies became the target city and over 80,000 people killed.

At the end of the school year, Ms. Koga wanted to give her thoughts on the logo and cheer. With the help of the photography teacher she made her comments on the short 3 ½ minute school morning announcements on Richland High’s YouTube channel Atomic TV.

Ms. Koga explained that she didn’t want them to change their logo/mascot, but to help them with another perspective about what that cloud represents. “…after the explosion the cloud is basically made up of things that the bomb destroyed…I’m here today because it was a cloudy day.”

As the daughter of a Hiroshima survivor knowing how much my mother suffered and lost under one of those famous mushroom clouds, I do wish that they would change their logo and chant. I understand the pride the school has for the Hanford workers who were doing their patriotic duty. I have no issue with that. What I take issue with is celebrating something that killed members of my family, innocent women, children, and the elderly. Perpetuating an insensitive chant dehumanizes the many innocents who suffered in the bombing. This is why the stories of the survivors need to be told so that the students/teachers can understand why people like myself find the logo and the chant offensive. I don’t feel that they are using this logo/chant to be cruel, they just may not understand what the mushroom cloud represents. (I want to make it clear that I do not find the students, teachers, or citizens offensive.)

If I can explain the damage, the loss, the death under that cloud, then students can understand what could happen to their loved ones, if events were reversed, and ultimately come to an understanding that no family should ever have to live through that again. Ignoring the effects of the bombing on the innocent confounds and angers me. We can/should be proud of the work Hanford citizens did for their country but not proud of the death and destruction a nuclear bomb caused. Both stories can co-exist with respect and peace. I know that because I experienced that first-hand just a few months ago when I visited another Manhattan Project site- The Secret City of Oak Ridge TN. 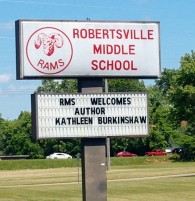 When I found out that the Tennessee Association of School Librarians (TASL) nominated The Last Cherry Blossom (TLCB) for the Volunteer State Book Award, I did my chair happy dance 🙂  Scot Smith, Media Specialist at Robertsville Middle School in Oak Ridge, TN invited me to speak about TLCB and my mother surviving the atomic bombing of Hiroshima to four middle schools in Oak Ridge and surrounding towns. I looked forward to my first chance connecting with students, in person, at Tennessee schools (I’ve Skyped with TN schools). I had no idea just how connected my mother’s story would be to that city. But, more on that tomorrow…

Bringing you yesterday's news from Japan and Asia, today.

a place for Middle Grade book-lovers to share and connect